Apple butter thickly laid over a heavy slice of bread warm from the oven is a pioneer staple that deserves a revival in the orchard-rich Okanagan Valley.

Apple butter is a highly concentrated form of apple sauce produced by long, slow cooking of apples to a point where the sugar in the apples caramelize turning the apple butter a deep brown. Originating in the Middle Ages at monasteries with apple orchards, the secret to making this delicious preserve came over to colonial America with the settlers. Apple butter originated as a way to store apples without refrigeration, before canning was available. Groups would get together for an all-day affair that involved big kettles filled with apples, cider and spices that required constant stirring with big wooden paddles.

Everything you would ever need to know about the historical methods of making apple butter and a recipe to make your own with original methods can be found on the skill cult blog. It’s author encouraged me to try to the historical version but a bit leery on the food safety question, I decided sterilizing jars and finishing off with a good hard boil in a canner  was a surer bet.

My recipe is a modern version using a crockpot, an apple peeler (can peel by hand) and an immersion blender (can use a blender or a whisk) and requires no all-day wooden paddle manning.  Maybe I’m missing out although I’m happily married to my swain, The Handyman…

Here is where the fun came in, or the ladle was too large, in theory, at least, to be handled by one person, and it was customary for the girls and boys in pairs to take turns in stirring. The lady always had the choice of a partner to assist her when her turn came, and whichever swain she selected was regarded by the others as her favourite beau… The Conquest of Missouri, Joseph Mills Hanson, 1918

Karolina and Doug from Forest Green Man Lavender farm in Naramata kindly gifted me a beautiful box of these lovely Gala apples. Any sweet apple will do or you can mix different varieties. 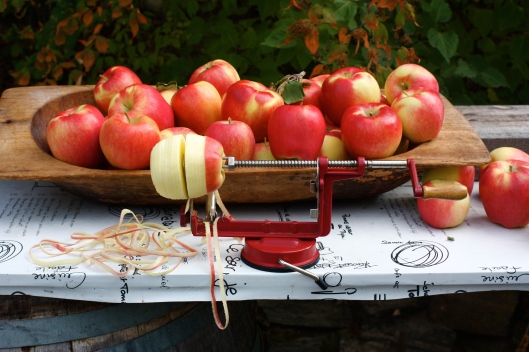 Peel, core and slice your apples. This handy gizmo does all three licketty-split.

Fill your crock pot to the brim. The apples will settle quite a bit as they cook and soften.

Add 1 to 2 cups of sugar (to taste),( I made some of it brown sugar for flavour), add 1 tsp. or 2 tsp. cinnamon (depending on the size of your crock pot), 1/4 tsp ground cloves, pinch of salt, 1/2 tsp allspice and one whole vanilla bean pod. Just sprinkle these ingredients on top of the apples. (Remove the vanilla pod before loading into jars)

Step 5 Cook on low for about 10 hours

If you peel your apples in the evening, leave the crock pot on low overnight with the lid slightly ajar to let steam escape. In the morning, use an immersion blender or transfer your applesauce into a blender to smooth out the mixture and then replace in the crock pot. Remove the lid for the last hour or so of cooking to thicken the mixture. (It will thicken a bit further after it cools.) Let it cook to your desired consistency. It will turn a nice scrumptious carmel colour.

Step 6 Water bath can your apple butter.  Sterilize your canning jars, fill them leaving 1/4 inch head space, wipe rims clean, place your lids on and place in a canner filled with boiling water and boil for 15 minutes. 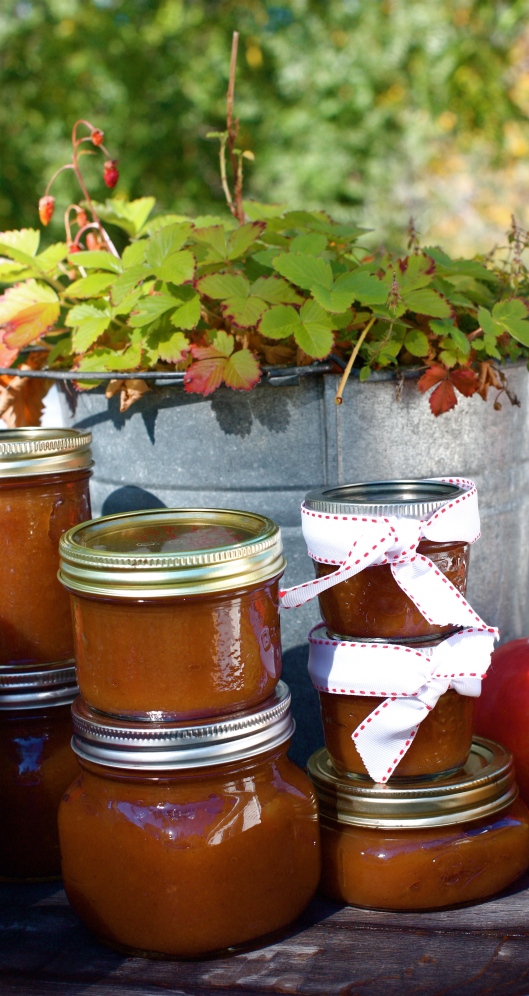 Your house will smell amazing during the long slow apple cooking. Apple butter on raisin cinnamon bread is match made in heaven. 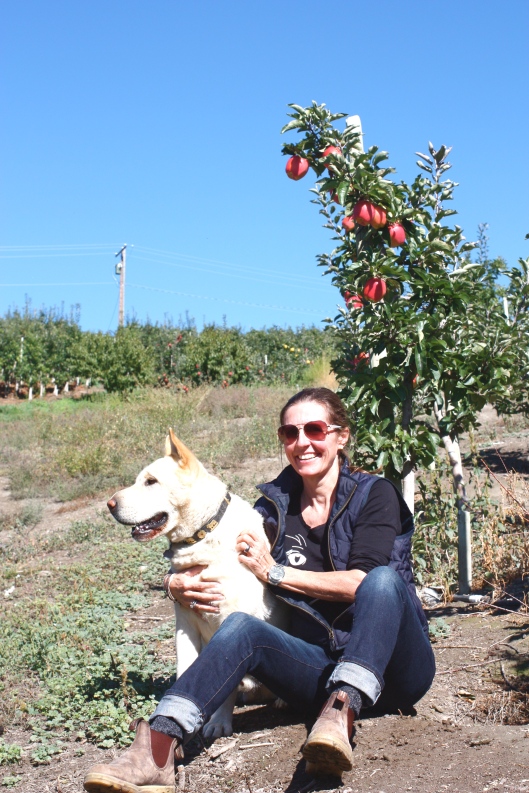 My last step was to drop off some jars at Karolina (pictured above with her rescue pal) and Doug’s lavender farm from whence the apples came. Thanks guys! I left with 20 pounds of beautiful Anjou pears. Mmmmm so it begins. Pear tarts?